The Fall of the Euorzone? Merkel Calls for “New Europe”

The Eurozone is on life support today with Italy taking center stage in the European debt crisis. The 10-year bond yield jumped above 7% at a level many economics say is unsustainable. The big news coming out of Europe is German Chancellor Angela Merkel calling for a “New Europe”. She is now calling for changes in EU treaties following French President’s Nicholas Sarkozy idea of a two-speed Europe. This two-speed idea would have core euro zone countries deepen their integration while an expanding group outside the currency bloc would remain loosely connected. This is suggesting countries will have to leave the euro to prevent the fall of the entire system.

Merkel is quoted as saying, “It is time for a breakthrough to a new Europe. A community that says, regardless of what happens in the rest of the world, that it can never again change its ground rules, that community simply can’t survive.”

Portugal, Ireland and Greece have all received EU-IMF bailouts as their bond yields increase (borrowing costs). The problem is Italy is to big to save. A bailout of Italy would bankrupt the entire Eurozone. LCH.Clearnet also increased the margin it demands on debt from Italy, raising the cost of holding Italian bonds.

European banks are heavily exposed to Italian debt with France exposed the most with $416.4 billion. Here’s a graphic detailing bank exposure by country. 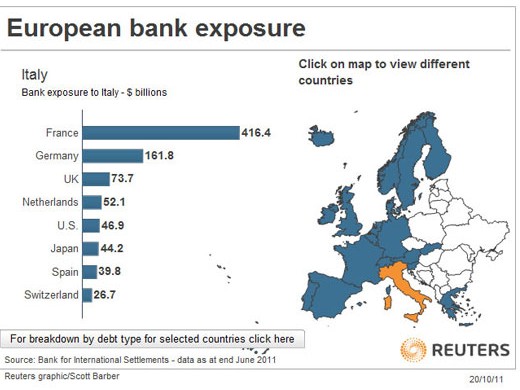 Adding fuel to the fire is the current political instability in Italy. Prime Minister Berlusconi lost his majority in a key parliamentary vote and has agreed to resign after implementing austerity measures demanded by the EU. However, he opposes any kind of transitional government and instead wants elections held which would happen sometime in February. This three-month gap will cause even more uncertainty in the fragile financial markets.

Leaders and policymakers outside Europe are frustrated as they keep pressure up for European leaders to take more action to stop the crisis from spreading. Head of the IMF, Christine Lagarde, was in Beijing recently and told a financial forum that Europe’s sovereign debt crisis risks dragging the global economy into a “lost-decade.”

Lagarde said, “Our sense is that if we do not act boldly and if we do not act together, the economy around the world runs the risk of downward spiral of uncertainty, financial instability and potential collapse of global demand … we could run the risk of what some commentators are already calling the lost decade.”

Many want the European Central Bank (ECB) to take a stronger role, but Germany is opposed to this.

Researching firms and major banks are also chiming in there belief that Italy and maybe even the whole Eurozone is on the verge.

Exclusive Analysis, a research firm on global risks, released a somber prediction on the Eurozone. They believe there is a 65% chance of defaults and bank runs for Greece and Italy and a 25% chance the Eurozone stays together in its current form

Even major banks like Barclays believe Italy is finished. Barclays released a report recently and in it states, “Italy is now mathematically beyond point of no return.”

An avid market watcher, Martin enjoys the tech arena the most with the Nasdaq being his main area of focus. A finance major, Martin is working to the goal of one day ringing the bell at the NYSE.
Related Posts
Greece Anticipates A Deepening Recession

Papandreou Out, Papademos In

Want to join the discussion?
Feel free to contribute!